The cold climate should not be an excuse for you to not enjoy this great game. It's quite true that golf is a game best played during the warmer months. But it doesn't mean that you have to pack up your golf clubs and sit out the bad weather.

Winter golf is a different game than the summer variety, but if you prepare correctly, it can be just as, if not more, fun and exhilarating.

CAN YOU PLAY GOLF IN SNOW?

Just because Jack Frost is nipping at your nose, toes and every other part of your body doesn't mean you should put your clubs away for the winter. In fact, some are making a sport of playing golf in the snow.

Dedicated golfers in Canada, the United States, China, Korea, Japan, Europe and South America have been enjoying “snow golf” for some time. 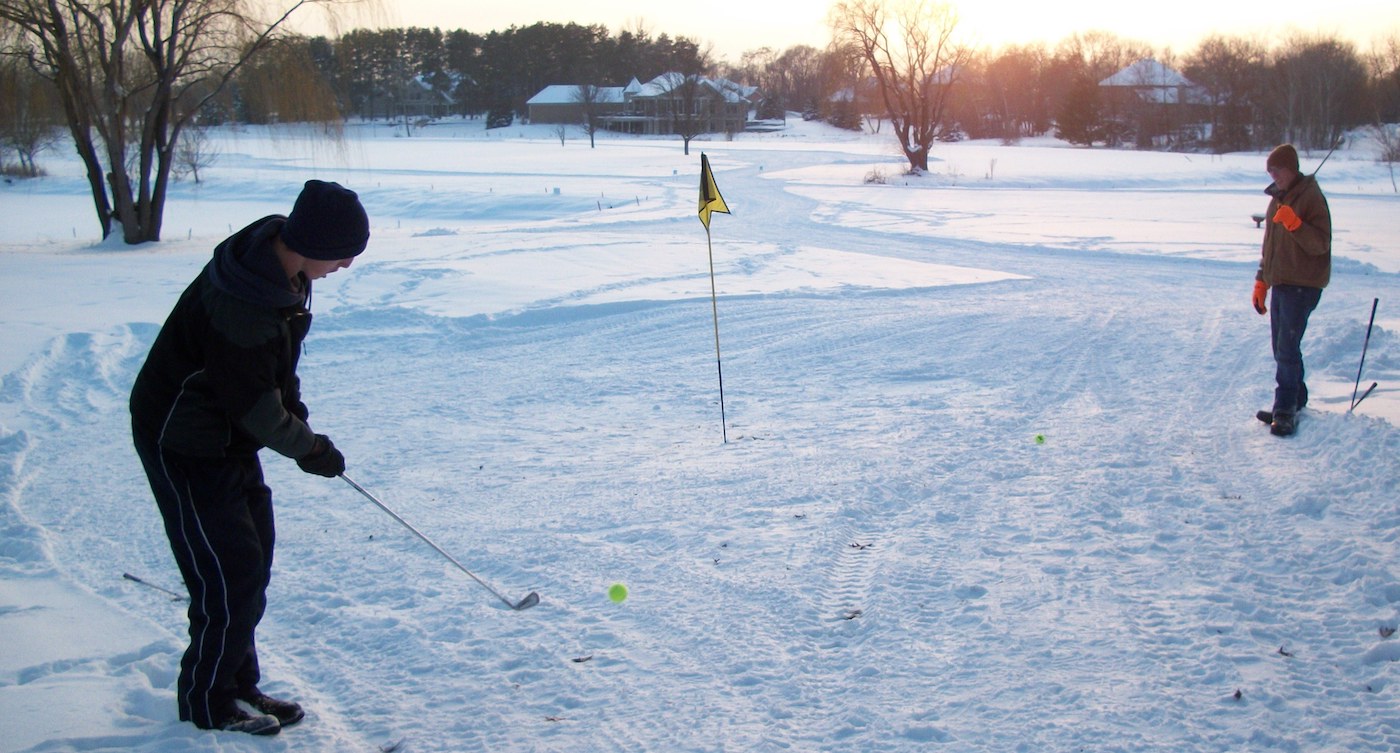 HOW IS SNOW GOLF PLAYED?

Snow golf is played in the exact same way as golf, the only difference is that the golf course is covered with snow and ice, rather than the grass. The courses used for snow golf are called "whites" equivalent to the term "greens" used for regular golf courses.

The equipment used for snow golf—golf balls and clubs—are exactly the same as that used for regular golf. The only difference is, the balls used are colored rather than white, to aid in visibility (white golf balls in the snow makes for a difficult round).

The game play and the scoring works exactly the same as golf. Each player individually completes the 9 or 18 hole course, with each hole assigned a par value, with the fewest possible strokes. 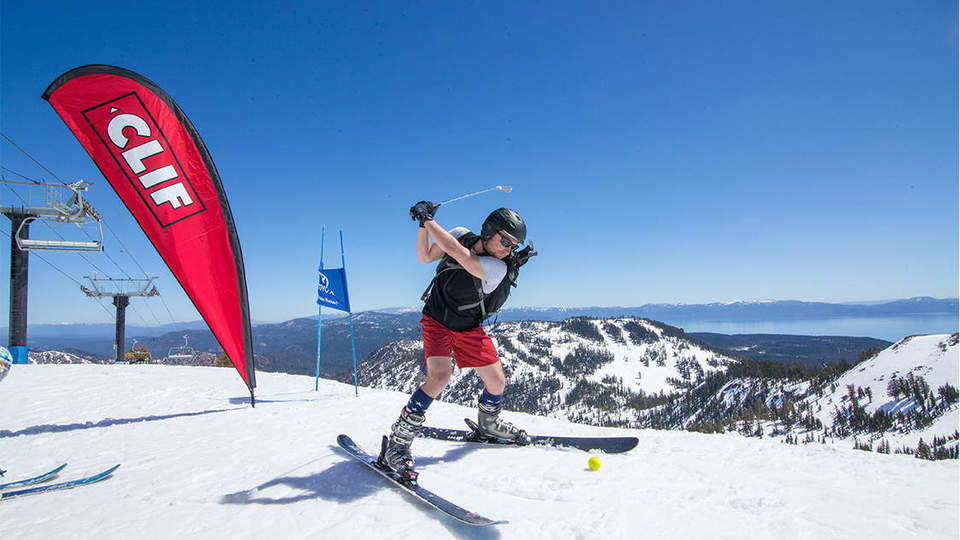 Evidence for golf as a popular winter pastime can be seen in numerous 17th-century paintings by renowned artists Aert van der Neer and Hendrick Avercamp. There is also evidence that golf was practiced on snow and ice in Scotland.

Kipling took so strongly to the game he wouldn't let inclement weather get in his way of enjoying it. In fact, when Kipling was holed up in Vermont writing The Jungle Book, he invented the game of snow golf to keep his swing sharp and relax with a few holes behind his house.

Nearly a century after Kipling played snow golf, a Canadian, Tina Blomme, picked up the torch and created a modern version of the game complete with an official snow golf course in Quebec. 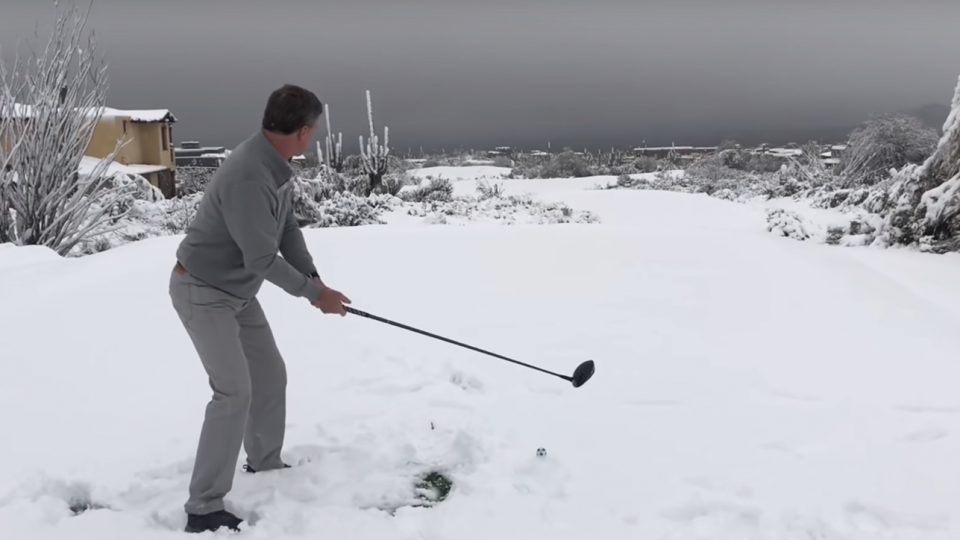 WHAT SHOULD YOU WEAR TO PLAY GOLF IN THE WINTER?

While playing snow golf your are likely to lose most of your body heat through your hands and head. To stay warm you need to keep them covered.

A toasty ski cap and a really good pair of mittens are a must for playing golf in the snow. A pack of hand warmers in your mittens to keep your hands warm between shots is a good idea as well.

To keep your body warm, layer-up with some lightweight warm weather gear. The new high-tech gear is lighter in weight than the old long johns and wool sweaters. The material is designed to keep heat in and allow moisture out for maximum comfort.

IS SNOW GOLF DIFFICULT TO PLAY?

Playing golf in the snow is not for the faint of heart.

Due to the ball being cold, your many layers of clothes and lack of footing it is impossible to hit the ball as far as you do in the summer so you will have to take more club.

Due to the elements, you’re better off checking your ego at the first tee. Shooting your summer score probably isn't in the cards.

Snow golf is about being brave and having fun. Enjoy the elements, the camaraderie with your friends, and the sense of discovery that you are doing something that very few will do. Also I suggest winter golfers carry a camera you never know what you are going to see that you never do in the summer. 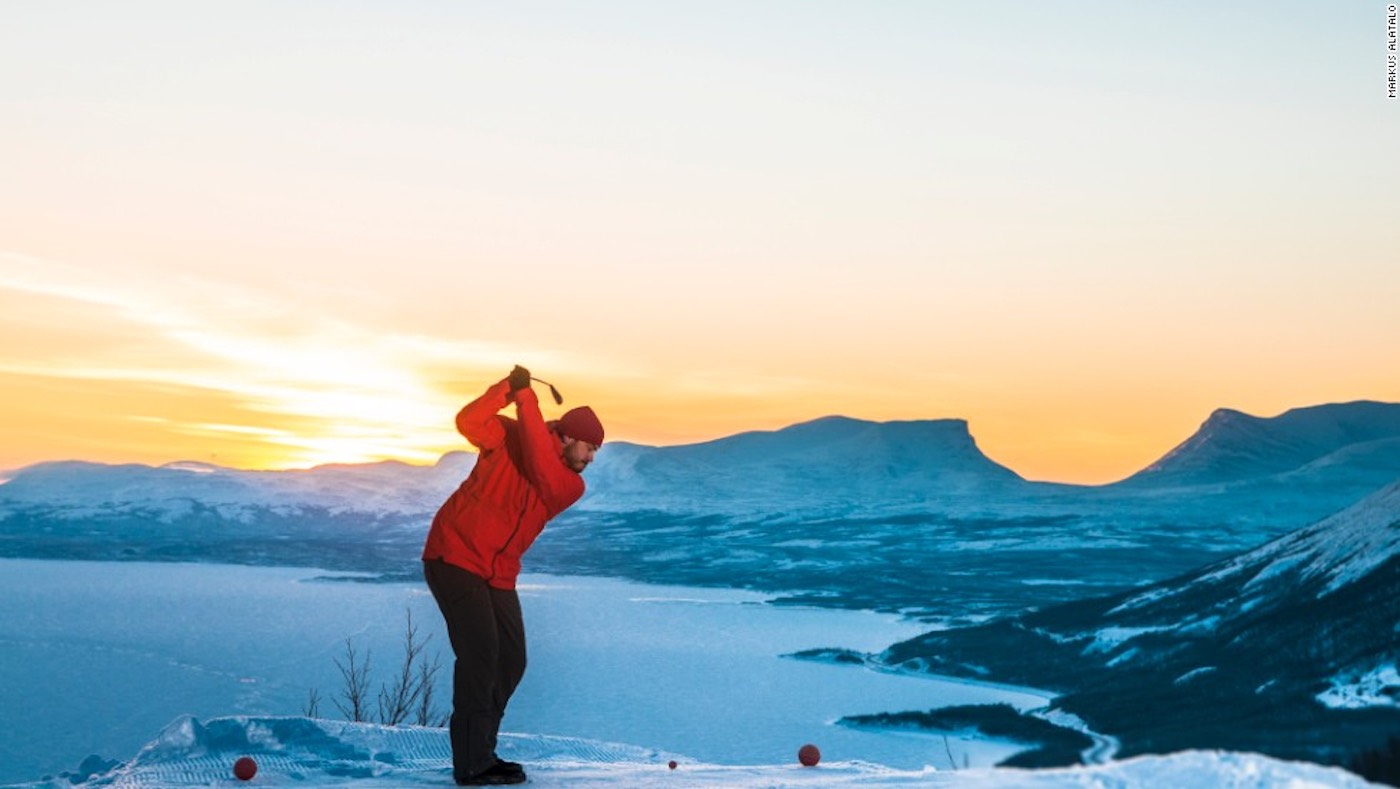 The cold climate should not be an excuse for you to not enjoy this great game. Winter golf is a different game than the summer variety. First there are no lines and slow play doesn't exist when there is no one on the course but you.

The summer infestation of mosquitoes is gone and that lake you have trouble carrying in the summer is frozen. No, it's not exactly the same game, nor is it the same expectations for your mid Spring or Summer rounds. But if you prepare correctly, it can be just as, if not more, fun and exhilarating.

Don't let layers of snow in the cold winter months stop you from enjoying the game of golf. It's quite true that golf is a game best played during the warmer months. But it doesn't mean that you have to pack up your golf clubs and sit out the bad weather.

So, there is really only one question: will you play golf in the snow this winter?

Ask how you can receive one of our Exclusive Customer Care Packages today, and start #LivingLifeToATee.

Find out how much your home is worth today, so you can plan for tomorrow!
SUCCESSFUL SUBMISSION, CHECK YOUR EMAIL!